There is a Zen proverb that says, "The mind is like a drunken monkey". I think there's more to the proverb than that and I'm probably taking it way out of context, but that image applies to me at this moment. For the past few days, I have been wandering through theological dilemmas and attempting to articulate the conflicts and struggles in my head. This has led me into some fantastic conversations, but I'm still struggling to formulate my disperate ideas and struggles into a coherent body of thought. As such, this entry is stream of consciousness, marked by sudden rifts and subject changes and full of overt mentions of God and theologies. I make no apologies, that's where my mind is at the moment.

A few months ago I said to one of my friends that I don't feel. It wasn't a good articulation, but it was what I had reached at that moment. I finally realized yesterday what I meant by that. It's not that I have no emotions or don't feel things, it is that I seldom feel spontaneous, gut reactions to stimuli in my surroundings. Instead, my "feelings" are completely enmeshed with my thoughts. Whenever I have a reaction to anything, my brain immediately begins analyzing and attempting to understand why I have that reaction. I could blame this on incredibly practical parents or on being a Thinker in the Myers-Briggs personality test. It probably also has roots in traumatic childhood experiences or insecurities or self-censoring. However, I don't think there's anything wrong with having emotions that are completely integrated with logical thought processes. In the past I have tried to change this aspect of myself because it seems too cold and, according to social norms, "masculine". I have come to realize, however, that to change that would be to deny a part of my personality and identity.

This integration also affects the way I understand my relationships with people and with God, especially on the topic of love. Love, in my experience, isn't an inexplicable emotion. "Falling" in love seems strange to me because that would require spontaneous, unconsidered feeling, which I have difficulty with. Thus, when I love another person, and when I love God, I love them with my heart and my mind and my actions. For me, loving is a matter of thought and action more than raw emotion. I don't know whether that's good or bad. I just know that, at this moment, that is my experience.

In Pastoral Care I have been reading about narrative therapy, which is a form of counseling in which the caregiver asks the careseeker to tell their life story, or the story of their current troubles, in order to identify the breaks and gaps in the story as hints to where the person's struggles may lie. The theological dimension of narrative therapy, then, is integrating the personal narrative of the careseeker with the divine narrative of God. As I began to think through the implications of this type of therapy in my own life, I was both reassured and troubled. I can see many ways in which my personal narrative interacts with my faith and my understanding of God. However, I have difficulty when it comes to integrating the Bible with that narrative. Scripture has been used throughout history as a tool of oppression and injustice. It has been used to justify slavery, war, imperialism/colonization, subjugation of women, exclusion of LGBT persons, and countless acts of physical and emotional violence. There are passages in Scripture that seem to support the very things I would spend my lifetime opposing. At the same time, Scripture is the basis of my Christian faith and, as such, essential to me. I am currently struggling to find a way to live in the tension between those things; I am trying to find a way to reclaim the oft-coopted Bible to give a message of hope to the oppressed, show love to all creation, and bring an end to injustice. I don't know just how to do that yet, but I suppose that is the struggle to which I am called.

I have been told that every preacher has one sermon that he or she gives over and over, just with different texts and words. I think that's a bit of an exaggeration, but, at the same time, isn't that true of all of us? Every person has particular passions and themes that he or she integrates, consciously or unconsciously, throughout his or her life. I'm not sure precisely what my themes are, and I certainly haven't identified my "one sermon" yet, but I am beginning to pick out a few things that I see weaving throughout my life. They are my passions, things I have learned to embrace and express without flinching. My staff share, for instance, revolved around the theme of courage, and not allowing fear to hold us back from that which we are inspired to do. One of my friends said earlier today that he thinks my sermon is equality because of my deep passion for recognizing the dignity and value inherent in all people. I'm beginning to think that it may also be to bring a message of hope, healing, and joy in the midst of brokenness, violence, and struggle of life. So far, my preaching voice is relatively undefined. I like to think that I won't have just one sermon, that I will be used by God to give many varied messages. My personal themes, however, are beginning to emerge.

I leave you with one question, the one I now drift off to sleep pondering: Once broken, can we ever be the same? And if we could, would we want to?
Posted by Lauren at 11:51 PM No comments:
Email ThisBlogThis!Share to TwitterShare to FacebookShare to Pinterest
Labels: love, seminary, theology

Who needs a valentine when you've got a family who does this? 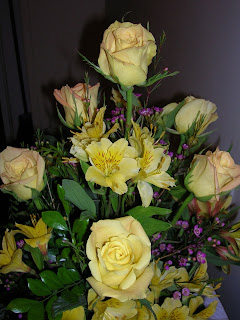 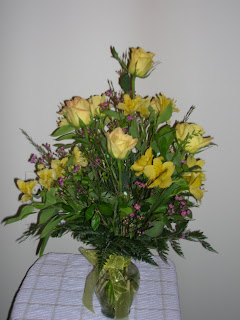 And friends who compile awesome woman-empowering mix CDs? A few of the selections from the CD exchange include:

Wednesday is coming, and whether you call it Valentine's Day or Singles Awareness Day or Dia de Diablo, it's impossible to ignore the approach of this so-called "holiday". So I've decided to share a few thoughts on this upcoming, erm, event.

It has been said "A woman needs a man like a fish needs a bicycle." And, I don't deny it, I don't NEED a man. I can open my own jars. I can kill the bugs in my apartment without screaming. I can fix my toilet, repair holes in the drywall, hang my own pictures, and fix most anything else around my home that needs to be taken care of. I can take my car to a mechanic and ask intelligent questions in hopes of avoiding being ripped off. I understand sports without explanation and I can burp loudly enough that I don't suffer withdrawal from lack of masculine presence. But it sure would be nice to have a guy around anyway.

I really hate jewelry commercials. They make women out to be shallow and pleased only by expensive gifts, while they imply that men have to purchase women's affections. Take, for instance, the slogan "Every kiss begins with Kay". As far as I'm concerned, that implies that women are prostituting themselves for jewelry. Based on what I know about the diamond industry and the incredible violence and exploitation it is guilty of, I don't ever want to be given a diamond!

I realize that a dozen red roses on Valentine's Day is supposed to be an incredibly romantic gift, but I'd rather have a bunch of daisies when I'm having a bad day than a bouquet of generic roses to fulfill a "requirement" on a prescribed "holiday". Besides, daisies are so much happier than roses, anyway.

Every year I give valentines to my friends wherever I'm living to show them how much I appreciate their day-to-day friendship and support. I don't place much stock in Valentine's Day for its romantic value, but it can be a great chance to tell my friends how much I love them. After all, romantic relationship come and go (more go than anything else) but your friends are always there to giggle with you over crushes, sympathize after the bad dates and fights, and help you drink to your exes when they're gone.

So enjoy Wednesday, no matter what title you give it, for whatever kind of love you want. I'll be singing Outkast's "Happy Valentine's Day" to myself.
Posted by Lauren at 10:22 PM No comments:
Email ThisBlogThis!Share to TwitterShare to FacebookShare to Pinterest
Labels: love

"When you dream
What do you dream about?
Are they blue, or black and white?
Yiddish or English or languages not yet concieved?
Are they silent or boisterous?
Do you hear noises just loud enough to be percieved?"
-Barenaked Ladies, "When You Dream", Stunt

I dream of a vibrant, passionate, global church that values social justice as well as disciple-making and that is truly open to and welcoming of ALL people.

I dream of a world free of all forms of violence.

I dream of a planet with clean water and air, with abudant trees and green spaces, and with undisturbed lands all across the globe where wildlife may be preserved.

I dream of people who have love and compassion for one another and who desire the good of those around them more than they value excess possessions.

I dream of safe, warm, dry housing for everyone on earth.

I dream of love and friendship throughout my life, no matter where my path may lead.

I dream of a world where art and music are valued and encouraged, where museums and concerts are not luxuries for the rich, but culture available to all.

I dream of laughter and joy, even in a life where pain and grief are inevitable.

I dream of greater understanding of, and closeness to, our loving and merciful God.

I dream of the end of all suffering.

I dream and refuse to let go.

What do you dream?
Posted by Lauren at 10:30 PM No comments:
Email ThisBlogThis!Share to TwitterShare to FacebookShare to Pinterest
Labels: identity, theology
Newer Posts Older Posts Home
Subscribe to: Posts (Atom)

People Who Read This Blog